Throughout Indiana's centennial year in 1916, county newspapers published numerous columns concerning the history of people and places within the boundaries of Porter County. Below is a transcription of a brief history of the Quakerdom Settlement located in Jackson Township that was written by Harrison H. Williams and published in The Chesterton Tribune. William's mentions Charles Osborn, a national figure in the Abolitionist movement who resided in Quakerdom in the late 1840s. Learn more about Charles Osborn in this blog post. 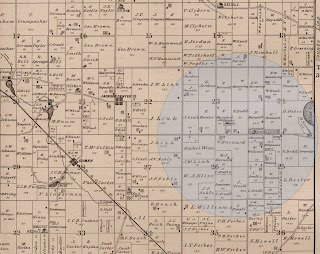 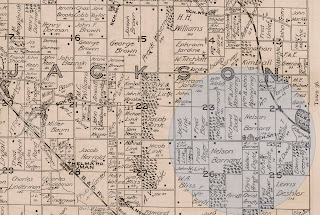 
An Account of the Quaker Settlement.
(Written by H. H. Williams).

Richard Williams, a life-long Quaker, and one of the early settlers of the Quaker settlement -- not one of the very oldest settlers, but the oldest man in the settlement -- settled on land in section 26; and built a log cabin just across the road from the house now occupied by Mr. Frank Burney, whose wife is a great-great-grand-daughter of Richard Williams.

Richard and his wife, Rachel, were the parents of ten children, four of whom were still at home at the time of the settling of Quakerdom: Alfred, Elem, Millikan, and Rachel.

William Williams, oldest son of Richard, moved from Economy, Wayne County, Indiana, (the old home of Richard and his family) to Quakerdom in 1845. He bought land on Coffee Creek; lived there till 1847, when he sold out and bought sixty acres, all heavy timber; built a log house about forty-five rods south of the corners.

Williams was a cabinet-maker by trade, and built a shop on the road just below the house where one of the Barnard boys now lives. He made all the furniture for years., such as bureaus, bedsteads, and tables as everything had to be made by hand. A good many pieces of the old furniture, especially bureaus, are scattered around yet. He made all the coffins for the neighborhood. Coffins did not cost as much in those days as at the present time; about five dollars was the average price and ten dollars would buy an extra fine one. William was also a carpenter, and built a good many houses, some of which are still standing. He was justice of the peace for about twenty-five years altogether and always went by the name of "Old Squire Williams."

William Williams was raised a Quaker until early manhood, when he thought their rules were a little too strict for a live young man to live up to. He liked to dance and would go to dances -- which was about the worst thing he could do in the estimation of the Quakers. They appointed a committee to wait on him and if he would acknowledge he had done wrong and agree to give up dancing, they would forgive him and take him back into the fold. That was a little more than he was willing to do so he was never reinstated.

William and his wife Lucretia were the parents of eleven children, eight boys and three girls. Lucretia died in 1856 at the age of forty-four, and William passed away at the age of nearly ninety-one. The children have all passed away except three of the boys.

William Barnard, Quaker and son-in-law of Richard Williams, moved to Quakerdom in 1835, built a cabin on the southeast corner on his land across the road from where Allen Barnard now lives; lived there for a few years when he built a more extensive log house about twenty-five rods north of the Quaker corners; lived there for a few years, and then built a frame house where Charles Barnard (a great grand-son) now lives.

William Barnard and Sally, his wife, were the parents of eleven children -- seven boys and four girls, all of whom lived to manhood and womanhood. Sally Barnard died October 27, 1864. William Barnard died January 4, 1887. All of their children have passed away but four: Clinton and Uriah, who live in Oklahoma; Elizabeth, Kansas; and Job, Washington, D. C.

Charles Osborne, a Quaker preacher, moved from Michigan about 1846, and bought land that Elliot Sarver and one of the Bauers now own, in section 25; built a frame house on the land; lived there a number of years until his death. He was the only regular preacher that the Quaker association ever had. After his death his family moved to Michigan.

About the time of Charles Osborne's death, Nathan Bayles, a Quaker, moved into the settlement and bought the Osborne place. Nathan and Jemima his wife, were the parents of seven children, three of whom were still with their parents. After Nathan's arrival in Quakerdom, he was one of the main pillars of the church and often talked in the meetings. He did not pretend to preach, but just talked when the spirit moved him.

The first and only Quaker meeting house was built on land donated by William Barnard. It was built in the early forties, on the land where the new Quakerdom school now stands. The house was a double log house built of unhewn logs; seats were made of slabs, flat side up, and holes bored with wooden pins for legs, which made very comfortable seats when there were no better.

The regular meeting days of the Quakers was Sunday or "First Day" as they called it, and Thursday, "Sixth Day." For a good many years they had no regular preacher, but they never forgot to attend the meetings at the day and the hour. They would go and sit without anyone saying a word for one hour as near as they could guess it. When the leader or deacon thought the hour was up, he would rise up slowly and deliberately and shake hands with the member nearest him. that was the signal for closing. Then all the members would arise and shake hands all around and depart for home, well-satisfied that they had put in a profitable time.

It was a trying time for the boys when they had to go to meeting and sit still though the hour. The boys would gather at the corners Sunday morning and have a good time, when Aunt Sally Barnard (every one called her "Aunt Sally") would come along and say, "Come, boys, and go to meeting." Of course, her own boys would go, and the rest of the boys of Quaker parents would go, and those that were not compelled, would go for the sake of company. But it was an hour of pretty severe punishment for the boys.

Although the Quakers are a peace-loving people and do not believe in war, when the Civil War commenced but a few of them opposed their sons enlisting in the army for the union. The Quakers that this branch belong to were all abolitionists and strongly opposed to slavery; so they did not oppose the war as strongly as they would if it had been for some other cause; as they hoped the war could be the means of freeing the slaves. Every able-bodies single man and boy in the Quaker neighborhood enlisted in the army and a good many of the married men, too. William Barnard had two sons in the army; Nathan Bayles had three; Lemmy Maulsby had two; Jonathan Williams had one; Charles Williams had one; Benny Maulsby had one who died in Andersonville prison; Azariah Williams had three sons in the army; David Peter had two; William Reed, one; William Earhart, one; Mr. Saint, one, and William Williams, six.

They all lived to return home except Lemmy Maulsby, Josiah Welch, James Earhart, and Clarke Williams.

There were more of the boys from Quakerdom in the 73d Indiana than in any other regiment, and they all got home. They were known in the regiment as the Quaker squad, and stuck together till the close of the war. It is said that sickness in the army killed five to one that bullets killed. A little sickness and great big homesickness generally got the boy. When one of the Quaker squad got sick, the rest of the boys kept him from getting home sick.

The Quaker boys came home and married out of the faith. The older one moved farther west or left their names in the little Quaker cemetery. The old log meeting house was not rebuilt and the Quaker settlement is now only a pleasant memory.

Let us hope the simple faith and high moral purpose of these sturdy pioneers may still live in the hearts of their descendants wherever they may be.