The Great Chesterton Earthquake of 1899

When considering earthquakes in the United States, Porter County, Indiana, is simply not a location that comes to mind. On Saturday, February 11, 1899, at approximately 4:00 am, however, an earthquake struck the Chesterton area, and news of this event was reported nationwide.

Felt throughout the county, the main shock lasted five seconds, reportedly shaking and rattling the windows of every building in Chesterton. The initial jolt was followed by at least three aftershocks. 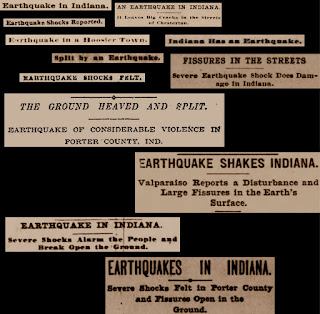 Chesterton residents ran into the streets or sought shelter in their cellars. A night watchman on College Hill in Valparaiso stated that he felt two vibrations at the time of the earthquake. Minor shocks were detected at Burdick, Hebron, and Wheeler.

Evidence of the earthquake was observable; ground fissures running in many directions were discovered in the streets at Chesterton, Hebron, Valparaiso, and several other locations in Westchester Township, some reported to be as wide as three inches.

Several buildings were mentioned to have been damaged in Chesterton, though none were reported to be affected in Valparaiso. For instance, the February 11 issue of the Chicago Tribune stated that:

Interestingly, despite the unusual nature of this event, The Chesterton Tribune published only a passing notice of the earthquake in its February 11 issue. The single paragraph mentions that a fissure appeared in the street crossing from Swanson & Johnson's store to the Myron B. Smith & Son's building, where present day Broadway Avenue intersects with Calumet Road.

Another crack ran across the street adjacent to Ed Schaper's jewelry store, where present day Grant Avenue intersects with Calumet Road. Chesterton's postmaster, Charles E. Hillstrom, was reported to have been awakened by the earthquake and initially believed it was the result of someone's safe being blown up in town.

There was also evidence of the earthquake outside the boundaries of Porter County. The February 17 issue of the Huntington Herald, for instance, reported that:


As a result of the earthquake at Chesterton, near this city, Friday, a fissure three inches wide was found on a marsh one mile south of here. A fissure eight inches wide and of unknown depth was also found on a division street road between New Carlisle and South Bend.

The earthquake database maintained by the Indiana Geological and Water Survey at Indiana University reveals that this earthquake's magnitude was estimated to be 4.1. Curiously, the earthquake's epicenter is placed slightly northwest of the intersection of county roads 50 South and 500 West in LaPorte County, about one-half mile north of Pinola. Contemporary newspaper reports, however, are silent with regard to this earthquake being felt anywhere within LaPorte County.

The Chesterton seismic event may have been associated with earthquakes that took place in the Midwest the two previous days. On February 9, an earthquake occurred near Maysville, Mason County, Kentucky, followed by another temblor on February 10 in Montcalm County, Michigan.

The only other known earthquake to center itself within Porter County occurred at 12:30 am on February 12, 1938. This 3.7 magnitude earthquake was felt primarily at Valparaiso and had an approximate duration of three seconds. The Indiana State Police reported that it had received reports concerning this seismic event from Paw Paw, Van Buren County, Michigan, and the southern reaches of Chicago.

The Vidette-Messenger, Valparaiso, Porter County, Indiana; February 12, 1938; Volume 11, Page 1, Column 3. Column titled "Valparaiso Had An Earthquake; Did You Feel It?"