Readers of this blog may have noticed that many of the stories posted here include the following citation:

The Illustrated Historical Atlas of Porter County, Indiana was written just prior to explosion of county histories that began to appear across the United States from 1880 to approximately 1915. With respect to Porter County, comprehensive histories were published by Weston Arthur Goodspeed and Charles Blanchard (1882), The Lewis Publishing Company (1912) and Thomas Harvey Cannon, Hannibal H. Loring, and Charles J. Robb (1927). 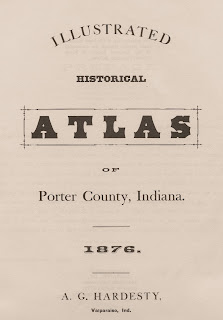 A majority of county histories were funded through a subscription of county residents. These patrons of the published history would then prepare a family biography to be included in the final work; oftentimes, these biographies were compiled together into a second or third volume of the county history. Consequently, county histories are occasionally referred to as mug books.


Hardesty's history of Porter County, Indiana, is unique in that it was published very early, prior to the county history publication craze. While it also does not contain biographies, Hardesty's history includes plat maps of each township in the county. These plat maps are the first comprehensive set of plats to be published for Porter County and provide a framework to understand how various communities developed over time. It is likely the history of the county was prepared in celebration and commemoration of the nation's centennial. Hardesty also published a list of men from Porter County that served in the Civil War. 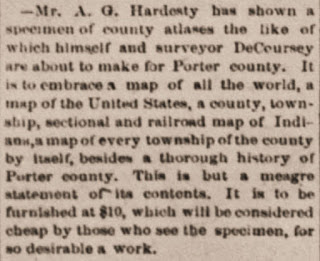 Newspaper item concerning the upcoming publication of a county
atlas for Porter County prepared by A. G. Hardesty and surveyor DeCoursey.
Source: Porter County Vidette, April 22, 1875.
Interestingly, the name of A. G. Hardesty appears only once in other published Porter County histories, and as a passing reference to a historical event that took place in 1872. There was also no notice in the local county newspapers when A. G. Hardesty passed away in 1892. The historical event was an accidental shooting that took place in Union Township and was published in Goodspeed and Blanchard's 1882 county history:

Accidental, Criminal, Incidental, etc. -- In November, 1872, while Royal White, of Lake County, and his brother-in-law, McColby, were at the Cascade Mills, Mr. White was accidentally killed. While waiting for their grist to be ground, they passed away the time in hunting ducks on the mill-pond. After an absence of an hour or two, they returned and deposited their guns in the wagon, after which they hitched the team, and, as McColby was preparing to drive, Mr. White reached into the wagon box and took the gun by the muzzle, and, in pulling it toward him, one of the hammers caught on a sack, and the barrel, heavily loaded with buckshot, was discharged, the load passing through the wagon box and entering his right breast. McColby ran into the mill and notified A. G. Hardesty, who closed the mill and went to the scene of the accident. The wounded man was on his knees, drenched in his own blood, with both hands pressed to the wound, but he arose and walked to the house of David Hardesty. Dr. [Alonzo W.] Vincent, of Deep River, was called, then Dr. [Alonzo J.] Pratt, of Crown Point, but he was beyond the reach of surgical skill. Splinters of the wagon box, two inches long, and portions of gun-wadding, were taken from his lungs, a few hours before death. He died in about three weeks. His remains were placed in the Crown Point Cemetery.

The Cascade Mills was a flouring mill located along the north bank of Taylor Creek, on the east side of County Road 750 West and approximately one-half mile south of U.S. Route 30. This 18-foot by 40-foot, three story brick structure was erected by David Hardesty in 1861. In 1882, the mill was sold to Levi Huffman and was producing flour as late as 1936 when it was referred to as the Huffman Mill. The structure has since been razed. 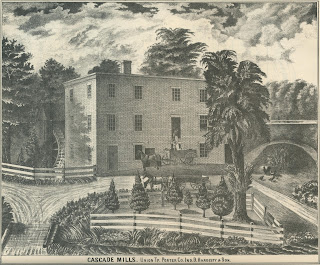 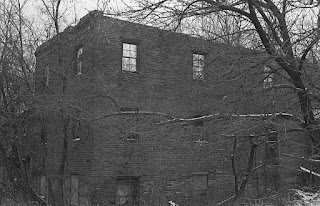 The 1850 Federal Census indicates that David and Sophia were residing in Carroll County, Ohio, with their children Adolphus, Albert, and Millard on October 18. Adolphus, the eldest child, was born September 17, 1846, at Malvern in Carroll County. Ten years later, the family was enumerated during the federal census on September 20, 1860, and were living in Union Township, Porter County, Indiana. David is listed as a "farm laborer." Two additional children, Rachel (age 7) and Reed (age 3), were residing in the Hardesty household in 1860. The 1860 Federal Census shows that Reed was born in Ohio, and it is known that Reed was born on April 20, 1858. Thus, at some point between April 20, 1858, and September 20, 1860, David and Sophia Hardesty moved their family to Porter County's Union Township.

During the Civil War, Adolphus G. Hardesty enlisted on July 12, 1863, in Company A of the Seventh Indiana Cavalry Volunteers, mustering into service on October 1, 1863, at Indianapolis, Marion County, Indiana. At the time of his enlistment, Adolphus was 16 years old, which would have made him ineligible to legally serve. To serve, an enlistee had to be a minimum of 18 years of age, and 18 to 20 year old males required the consent of their parents in order to enlist. Hence, Adolphus must have lied about his age in order to enlist for service.

Company A was commanded by Valparaiso resident Captain John Charles Febles, who was later commissioned to major on October 27, 1863. Hardesty would transfer to Company C of the Seventh Indiana Cavalry Volunteers during the war and muster out of service at Austin, Travis County, Texas, on March 26, 1866. 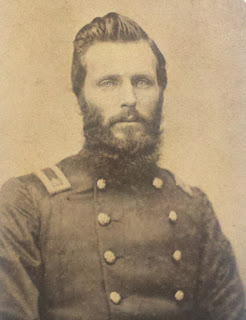 As mentioned previously, David Hardesty constructed a flouring mill along Union Township's Taylor Creek in 1861. Appropriately, the 1870 Federal Census of Union Township reveals David's occupation as "Prop. Grist Mill," the mill property being valued at $12,000. Adolphus, though 24 years old and married, was living within his father's household in 1870 and is listed as "working on farm." Mary, Adolphus' wife, was living with her parents John E. Small and Mary Jane (Riley) Small in Union Township. Millard F. Hardesty, the one-year-old son of Adolphus and Mary, was residing with Mary.

Why were Adolphus and Mary living separately in Union Township in 1870? It is likely there were marital issues and Adolphus and Mary divorced since Porter County marriage records show that Adolphus Hardesty and Mary Hardesty married again on February 12, 1874. 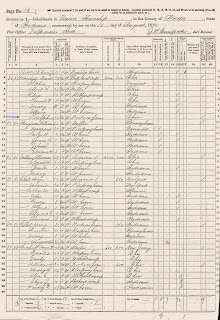 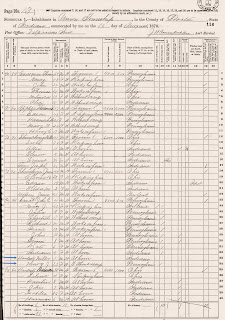 Between 1870 and 1880, Adolphus G. Hardesty apparently studied law, as he appears with the occupation of "Attorney" in the federal census of Elkhorn, Lincoln County, Kansas, enumerated on June 21, 1880. At Elkhorn, Adolphus is found living with his wife Mary and their son Millard F., age 11. Whether he attended law school or was trained by reading law under a Porter County attorney is unknown. Valparaiso's Northern Indiana Law School (later renamed Valparaiso University School of Law) was founded by Colonel Mark L. DeMotte on November 11, 1879, thus it is very unlikely Hardesty was trained at that institution. Evidence suggests that Adolphus moved with his family to Kansas at some point between 1876 and 1880. 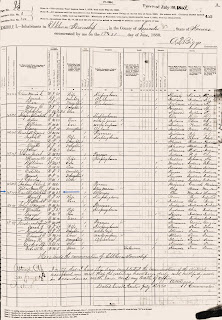 In his Illustrated Historical Atlas of Porter County, Indiana, Hardesty tenders thanks to Henry S. Adams, Dr. Cornelius Blachly, Perry Blake, William Emery Brown, Jacob Hurlburt, Albert E. Letts, James C. Morgan, "and many others ... for the facts embodied in this work." Each of these individuals was an early settler of Porter County, or the son of an early settler. Therefore, Hardesty likely leaned upon these men to provide a sizeable portion of the county history contained in his book. Unfortunately, the factors that motivated Hardesty to compile the county's first history remain unknown. 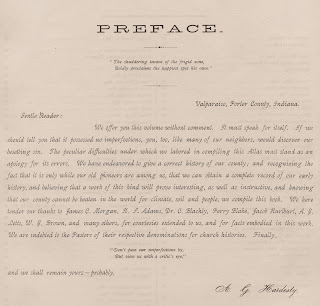 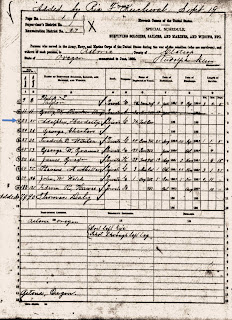 In October 1889, Adolphus G. Hardesty had traveled to Oregon. The October 13, 1889, issue of The Daily Morning Astorian makes a brief mention of Hardesty's travel:


Judge A. G. Hardesty of Lincoln county, Kansas, arrived in the city a day or two ago and is so favorably impressed with Astoria and its surroundings that he intends to remain and practice law.

Indeed, Hardesty moved his family to Astoria where he would continue his law practice and serve as a pro-tem prosecutor.  By December of 1889, Hardesty was a very active participant in the community and served as "Officer of the Day" for the Cushing Post No. 14 of the Grand Army of the Republic (G.A.R.).

Hardesty's life as an Oregonian, however, was relatively brief. He suffered a stroke in Portland, Multnomah County, Oregon, at 1:00 am on Sunday, August 28, 1892, and died at 12:15 pm that day. The body was transported to Lincoln Cemetery in Lincoln, Lincoln County, Kansas for burial. 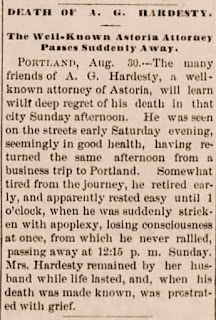 On November 30, 1894, about two years following his death, a standard Civil War veteran headstone was ordered and delivered from the Vermont Marble Company located in Proctor, Rutland County, Vermont, and placed upon Adolphus G. Hardesty's burial site in Kansas. 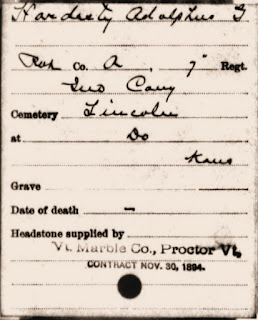 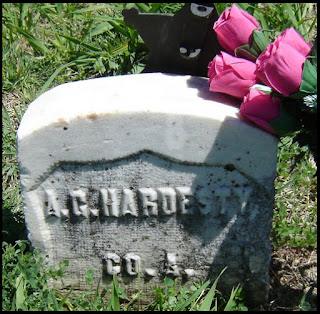 Adolphus' widow, Mary J. (Small) Hardesty, never remarried following his death. By November 1904, it is known that Mary was residing in Chicago. Mary then moved to Hobart, Lake County, Indiana, around 1905, along with her son Millard. She would live in Hobart for the remainder of her life, her final residence being located at 804 East 3rd Street in Hobart. 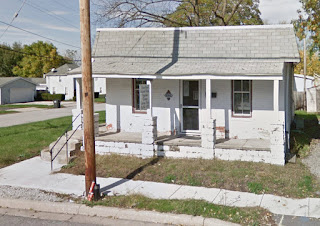 On August 19, 1942, Mary died at Methodist Hospital located in Gary, Lake County, Indiana; her death being attributed to bronchial pneumonia. Rather than being buried in Kansas next to her husband, Mary's remains were interred in Mosier Cemetery in Porter County's Union Township on August 21, 1942. 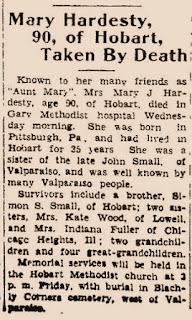 Millard would move back to the Astoria, Oregon, by 1910, as he appears with a wife, Nettie, and son, Fred, in the Federal Census of that city. The 1920 Federal Census indicates that Millard's family was living at Seaside, Clatsop County, Oregon. The 1930 Federal Census shows the family had again moved, and were residing in Portland, Oregon. Millard died at his home on October 29, 1933, at Portland and was buried at Greenwood Cemetery in Astoria. His death notice was published in both Indiana and Oregon newspapers. 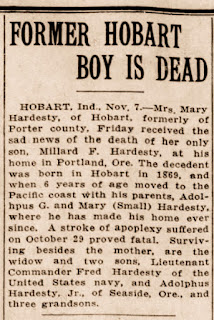 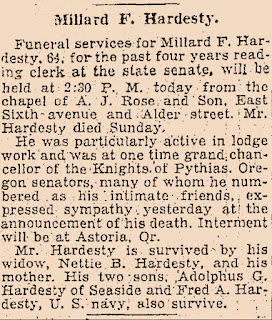 Books
Cannon, Thomas H., H. H. Loring, and Charles J. Robb. 1927. History of the Lake and Calumet Region of Indiana, Embracing the Counties of Lake, Porter and LaPorte: An Historical Account of Its People and Its Progress from the Earliest Times to the Present. Volume I. Indianapolis, Indiana: Historians' Association. 840 p.