The political existence of Porter County, Indiana, was initiated in March 1835 when the county commissioners of LaPorte County, which had jurisdiction of the land now comprising the counties of Lake and Porter, ordered that land located west of the current LaPorte-Porter county line be laid off into election districts and townships.

In February 1850, Porter County commissioners detached Sections 1, 12, 13, 24, 25, and 36 and east halves of Sections 2, 11, 14, 23, 26, and 35 in Township 34 North, Range 5 West, from Morgan Township and created Essex Township. This new township was quite small, 1.5 miles between its western and eastern boundaries and six miles in distance from north to south. Its total area consisted of nine square miles. 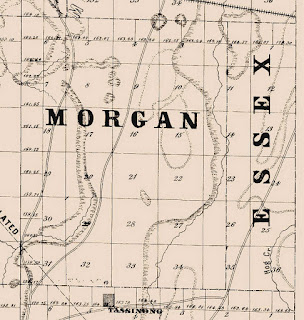 Plat Map showing the original boundaries of Essex Township.
In March 1855, Essex doubled in size when the county
commissioners severed the eastern 1.5 miles of Morgan Township
shown in this map and attached it to Essex Township.
Source: A. P. Abbot's Sectional Map of Porter County, Indiana, 1855.

The 1870 Federal Census records reveal that a total of 36 dwelling houses existed in Essex Township that year. With such a sparse population, it would have been difficult to operate necessary township functions (e.g., elections, schools) and have enough individuals filling official township positions (e.g., justice of the peace, school commissioners, teachers, trustees).

Essex Township remained unchanged, three miles from east to west and six miles from north to south, until June 14, 1880, when 67 citizens of Morgan and Essex Townships petitioned the county commissioners to merge Essex Township into Morgan Township. The Porter County Vidette, in a short notice, reported the dissolution of Essex Township in its June 24, 1880, issue as follows:

What Morgan Township had lost 25 and 30 years earlier was regained as part of its jurisdiction. Morgan Township's boundaries have remained fixed for over 136 years.

A complete list of individuals that served as Essex Township trustees does not exist. It is known, however, that Jason Osborn and James Black were two trustees of the township and that George Williams was elected a trustee but never served given that Essex Township was reattached to Morgan Township before he could serve his term. 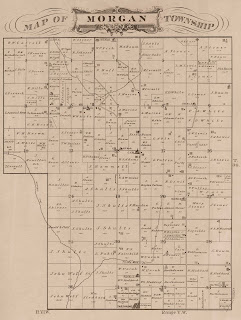 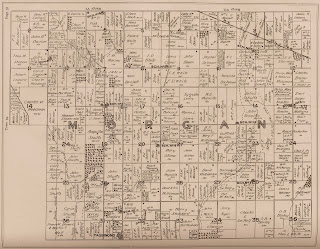 To some degree the name of Essex still persists within Porter County in the form of Essex Cemetery. This cemetery is referred to by a variety of names, including: Salem Evangelical and Reformed Church Cemetery, Salem-Friedhoff Cemetery, and Salem United Church of Christ Cemetery.

The Essex Cemetery was established in 1891, after Essex Township had been reattached to Morgan Township, and dedicated in 1892. This cemetery is connected to the German Evangelical Salem Church (Salem United Church of Christ) located in Wanatah, LaPorte County, Indiana.

A Salem congregation was started by German settlers who migrated to Cass Township, LaPorte County, Indiana, during the 1850s and 1860s. The congregation was formally organized on March 15, 1869, by Reverend Carl Schaub as the German United Salem Church (Die Deutsche Vereinigte Salems Gemeinde) of Wanatah, Indiana, and was affiliated with the German Evangelical Church of the West in St. Louis, Missouri.

In 1875, land for a cemetery was jointly purchased in Wanatah by Salem Evangelical Church and St. John's Lutheran Church to be used for the burial of their congregants. By 1891, it became necessary for both congregations to find new locations for the purpose of burying church members. A new site located approximately one mile west of Wanatah in Porter County was acquired by the Salem Evangelical Church and formerly dedicated on January 1, 1892, by Reverend William Schulz.

Ironically, Essex Cemetery is geographically located in Section 36, Township 35 North, Range 5 West, in the extreme southeast corner of Washington Township, adjacent to what was to be referred to as the Oak Grove Farm. The cemetery is bordered on the east by LaPorte County and on the south by Morgan Township. It is located off County Line Road East just south of US Highway 30, with railway lines along its southern boundary.

Another historical element related to the use of Essex in Porter County is the Porter County seal. In a 2004 article published in The Times, it is mentioned that the county seal was designed by Chesterton resident Dave Rieger in 1976:


After eight years as Porter County recorder and a quarter century as a county employee, [Jacquelyn] Sterling had seen the design daily on official stationery and the county's flag. More personally, Sterling recognized the piece as the original artwork for the county's seal, done in 1976 by Dave Rieger....

However, Rieger's design for the county seal was not the first used by the county. According to Hubert Marshall Skinner's history of Porter County, published in 1878, T. A. E. Campbell designed the first county seal in 1837. Skinner wrote that:


...the seal represents the ship "Essex" which [Admiral David] Porter commanded. The word "Essex" could formerly be read on the ship; but the latter is worn by long use, the name no longer legible.

Campbell's seal was used by the Porter Circuit Court for decades.

It is generally accepted that Porter County was named in honor of Commodore David Porter. An officer in the United States Navy, Porter commanded several ships during his service, including the USS Constitution, USS Experiment, USS Enterprise, USS Essex, and USS Firefly.  He gained considerable fame during the War of 1812, where he and his crew represented the notion of American's want of free trade and captured the first British warship, the HMS Alert.

In February 1813, Porter sailed his warship, the USS Essex, around Cape Horn into the Pacific Ocean. Here, he successfully attacked several British whaling ships, capturing twelve ships and taking 360 prisoners. To capture ships, Porter would raise the British flag on the USS Essex, sail up to the British whaler, board the British ship, and then reveal his true allegiance.

During the Battle of Valparaiso (Chile), on March 28, 1814, the USS Essex became so disabled that Porter was forced to surrender to Captain James Hillyar of the British Royal Navy. The USS Essex's losses included 58 dead and 31 missing of her crew of 154. Porter was soon released by his British captors and then appointed to command the USS Firefly.

Engraving of the capture of the USS Essex (left) by the HMS Phoebe (center)
and HMS Cherub (right) in the harbor of Valparaiso, Chile, on March 28, 1814.
Source: Bowen's The Naval Monument, 1840.

Interestingly, Porter had a blot on his naval career. In 1823 he commanded a Navy expedition to the West Indies for the purpose of suppressing piracy in the region. During the expedition, Porter invaded the village of Fajardo, Puerto Rico, then a Spanish colony. The purpose of the attack was the avenge the jailing of an officer from his fleet. Porter was court-martialed for this invasion since the United States government did not sanction the attack.

The USS Essex was constructed by shipbuilder Enos Briggs at Salem, Massachusetts, at a cost $139,362. Building was initiated in 1798 and the ship was launched on September 30, 1799. Upon its capture in the harbor of Valparaiso, Chile, the ship became the property of the United Kingdom and renamed the HMS Essex. The British used the HMS Essex as a floating prison from 1824 to 1837 to house convicts in the harbor of Dún Laoghaire, Ireland. Convicts were then transferred to other ships and transited to Australia. The British sold the HMS Essex at auction on June 6, 1837, for £1,230.

Books
Bowen, Abel. 1840. The Naval Monument: Containing Official and Other Accounts of All the Battles Fought between the Navies of the United States and Great Britain During the Late War. Boston, Massachusetts: George Clark. 400 p. [see p. 106]