Dunn's Bridge, located on County Road 500 East, south of Kouts, Indiana, in Pleasant Township, spans the Kankakee River. The precise year in which the bridge was constructed seems lost to history, but numerous published sources indicate that the bridge was erected at some point in time between 1895 and 1904. 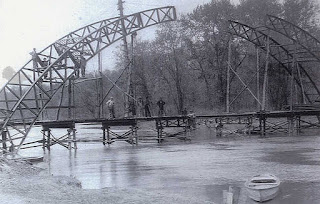 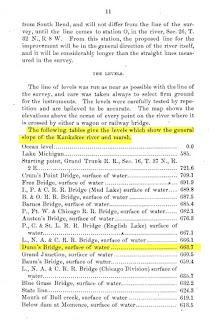 Interestingly, John Lyle Campbell had promoted the construction of a shipping canal connecting Lake Michigan with the Gulf of Mexico. As reported in the April 17, 1893, issue of The Indianapolis Journal, Campbell's proposed route would follow the boundary between the counties of Lake and Porter at Lake Michigan and then turned slightly southeastward to Baum's Bridge on the Kankakee River. The canal would then follow the Kankakee River to Dunn's Bridge, where it would turn south to the Monon River near Medaryville. From the Monon River, the route would travel to the Tippecanoe River, thence to the Wabash, Ohio, and Mississippi. Despite the canal never being seriously considered by the State of Indiana, Campbell clearly had a vision, stating:


"The Kankakee is our sleeping giant, which needs only be aroused that its mighty power may be used for the benefit of the State and Nation."

Perhaps the arched Dunn's Bridge we know today was not the original bridge spanning the Kankakee River at County Road 500 East?

An additional factor leading to some confusion related to the date of the construction of Dunn's Bridge is that Porter County issued a notice for bids for "removal and replacing" the bridge in 1915. The removal was not an actual demolition of the bridge and the erection of a new bridge. Rather, the commissioners of Porter County and Jasper County agreed to pay for the temporary removal of the middle sixty feet of the bridge. The removal was to allow the passage of the McWilliams dredge, which was instrumental in the creation of Marble Ditch. The central portion of the bridge was removed, swung to the bank of the river, and then replaced after the passage of the dredge. 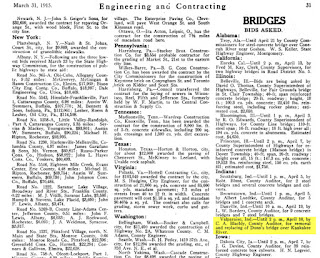 The bridge is named after farmer Isaac Dunn, a native of Maine. Dunn resided in Jasper County and had farm land on both sides of the river. It has been noted that Dunn erected the bridge as a means of moving his farming equipment from one side of the Kankakee River to the other side. One biography of Isaac Dunn states that he built two bridges. The first bridge was a wooden structure that spanned the Kankakee; this bridge was later replaced by Dunn with a "fine iron bridge." Unfortunately, Dunn's biography does not indicate the year that either bridge was constructed. 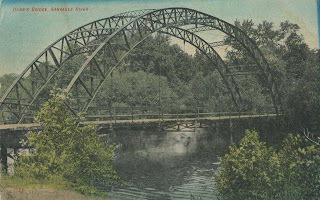 Postcard image of Dunn's Bridge published by the
Albert Hahn Company and postmarked in 1909.
Source: Collection of Steven R. Shook.

It has long been rumored that the structural frame of Dunn's Bridge was constructed from iron trusses taken from the world's first Ferris wheel that operated at the 1893 World's Columbian Exposition in Chicago, Illinois. This rumor is strongly believed to be untrue. First, the top of the bridge arch flattens out, while all of the components of the Ferris wheel were composed of continuous curves. More importantly, the 1893 Ferris wheel from the World's Columbian Exposition was removed to St. Louis, Missouri, for use at the 1904 Louisiana Purchase Exposition. At the conclusion of the exposition at St. Louis, the Ferris wheel was dynamited on May 11, 1906, and sold for scrap. Thus, the bridge's construction predated the dismantling of the Ferris wheel. And it is very unlikely that scrap metal obtained from a structure that was dismantled using dynamite would be used for the construction of a bridge where life safety is of paramount concern. 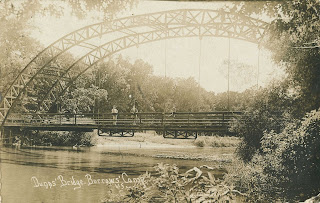 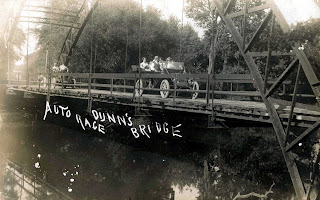 This theory is supported by Kay Folsom Nichols, who writes about Dunn's Bridge in her book The Kankakee, published in 1965. She writes (pp. 173-174):


"Another was the building of Dunn's bridge. It was the first iron bridge built on the upper end of the River, and was fashioned from iron salvaged from the dome of the Administration building of the World's Columbian Exposition - THE Chicago World's Fair of 1893.

P. E. Lane, a Boston engineer, conceived the idea of salvaging iron from the domes and roofs of the great building which were of fabricated iron. He visioned this material going into bridges at low cost, and so it happened that during the next few years after the fair closed, the streams and rivers of Northern Indiana, particularly Lake and Porter counties, and that part of Illinois nearest Chicago, were furnished with bridge material whose first purpose had been to shelter exhibits from all over the world. There are many of these structures still in use today."

Wesley Meyer, in his book The Story of Kankakee Township (Jasper County), sheds some additional light about Dunn's Bridge.  Meyer's writes (p. 22) that:


"He [a reporter from the Chicago Tribune] was told that Dunn went to Chicago in 1894 and bought parts of the giant ferris wheel which was used in Chicago's Columbian Exposition of 1893. The worn out parts were scheduled for replacement. The scrap was transported to Dunn's property by rail and horse-drawn carts, and then constructed over the river by Jasper and Porter Counties." 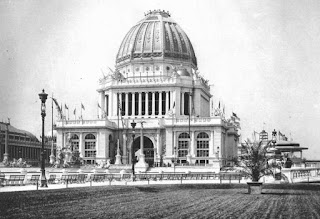 Yet another source for the arches can be traced back to a joint meeting between the Commissioners of Porter County and Jasper County on June 11, 1895. The meeting was held since the bridge spanning the river at that time was considered "unsafe." This meeting was held in the law offices Judge Crumpacker, at Hammond. Meyer's writes of this meeting, stating that (p. 22):


"The proposed bridge's specifications are spelled out in detail in the commissioner's records and are definitely those of Dunn's bridge.

At a meeting a week later, the two boards opened almost a dozen bids, some for wood and others for an iron and steel structure. The boards decided on an iron-steel structure. The same day a contract was signed with Lane Bridge and Iron Works of Chicago. According to the 'high cost' (high for then) it was assumed the firm supplied its own metal."

Given the totality of the facts, it appears that P. E. Lane's Chicago firm, Lane Bridge and Iron Works Company was the builder of Dunn's Bridge. To date, however, no evidence has been uncovered to determine exactly who designed the bridge, what company erected it, or the origin of the metal arches. 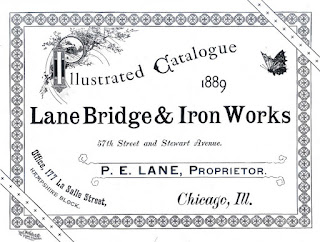 Dunn's Bridge was purchased by the Porter County Parks and Recreation Board for $8,800 in 1999 and today it is Dunn's Bridge County Park. The bridge was restored in the early 2000s, which resulted in an award at the Fifteenth Annual Engineering Banquet sponsored by the American Council of Engineering Companies of Indiana in 2003. Butler-Fairman and Seufert, Inc., of Indianapolis, now Butler, Fairman & Seufert, were the recipients of the award for their work on the project. 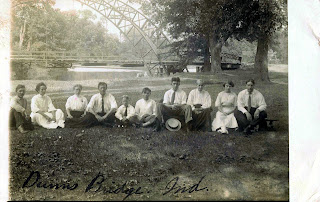 Postcard image of a gathering at Chaplain's Park
adjacent to Dunn's Bridge, postmarked in 1911.
Source: Collection of Steven R. Shook.

Campbell, John Lyle. 1883. Report Upon the Improvement of the Kankakee River and the Drainage of the Marsh Lands of Indiana. Indianapolis, Indiana: William B. Buford. 34 p. [see p. 11]