Background. John Pelton and Francis Staves were employed at a sawmill located near Arba Heald’s residence in Door Village, Scipio Township, LaPorte County, Indiana. While employed at the mill, Staves was staying at a “place of bad repute” operated by a man named Palmer. Pelton was reportedly a resident of New Durham Township, also in LaPorte County.

In the spring of 1838, Pelton had supposedly built up a considerable debt in the area, and to avoid his creditors he decided to head west. Staves was hired as Pelton’s guide, Staves pledging to provide for Pelton’s safe passage through the wild dunes country while traveling to Chicago. Prior to their departure, Pelton had remarked to Staves that he had $101 [approximately $2,650 in 2015 dollars] and a good horse. Thus began a journey resulting in Pelton’s demise.

Discovery. A bundle of clothing tied to a handkerchief was found by an Native American boy in the woodlands near Jesse Morgan’s residence in Westchester Township, Porter County, Indiana. At that time, Jesse Morgan resided at the southeast corner of the intersection of Porter Avenue and 150 East (Dickinson Road) just east of Indiana State Road 49. The boy’s father arrived at the location, and suspecting that something was wrong, began to search the area. The father spotted a boot poking out of a hollow created by an upturned tree. Upon further inspection, the father chanced upon the remains of a dead man, later identified as John Pelton, concealed in the cavity created by the upturned tree and partly hidden by brush. Alarmed, the Indian reported what he found to others at a nearby Indian camp; news of the body’s discovery was then sent to the whites. 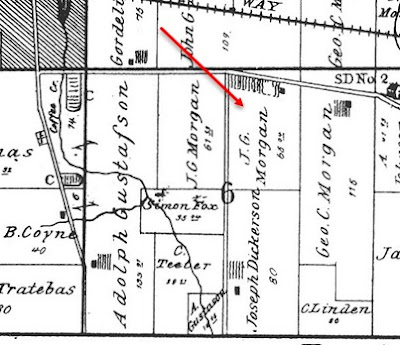 The Investigation. Soon after the discovery of the body, a coroner’s inquest was held to determine the cause of Pelton’s death. Ironically, Francis Staves was a one of the members of the coroner’s jury at the inquest. It has been reported that during the inquest that Staves had stated that “the man who did that ought to be hung.”

Given the circumstances of the case, suspicion started to fall upon Francis Staves as the murderer of John Pelton. Staves had been tracked to the general location of the murder, the evidence showing that his horse had a split hoof that matched that of the hoof tracks found near Pelton’s body. Staves was also seen at Old Maid’s Tavern, located a few miles northwest of Jesse Morgan’s residence, cleaning his saddle, and then soon after was observed with a new saddle. A knife found in Staves’ possession had a particular nick in the blade that corresponded to scrape marks visible on a hand-hewn wooden club found near Pelton’s remains; the club was used by the killer to bludgeon the man to death. Given the circumstantial evidence, Francis Staves was arrested and arraigned on Saturday, May 12, 1838, for the murder of John Pelton.

The Trial. Evidence presented by John H. Bradly, the prosecuting attorney, indicated that Pelton was shot from his horse by a ball that was fired from behind him. After falling from his horse, Pelton was shot once again. The coup de grâce was delivered with a hand-hewn wooden club, Pelton being savagely beaten about his head. Pelton was then relieved of his money by Staves.

Based on the evidence, Francis Staves was convicted of willfully murdering John Pelton, though Staves continued to maintain his innocence. Court records indicate that Staves was ordered to be confined in the county jail until June 29, 1838, on which date his sentence of death by hanging was to take place between the hours of 10 am and 4 pm. At this time, Porter County had not yet constructed a jail. Hence, Porter County Sheriff Charles G. Merrick transported Staves to LaPorte County, which had the nearest jail facility to confine prisoners.

The Execution. On Friday, June 29, 1838, Francis Staves’ death sentence by hanging was carried out in public view. The location of the hanging was in the northwest corner of block 8, lot 2 of the original plat of Valparaiso, directly across Erie Street from present day Central Elementary School; today this area is occupied by a parking lot. Note that in 1838 this particular location was a bit lower than the surrounding area and inhabited with hazel brush and virgin forest. The elevated area surrounding the constructed gallows provided public onlookers convenient seating with an unobstructed view.

Street view of the general location of the public hanging of
Francis Staves for the murder of John Pelton.
Northwest Quarter of Block 8, Lots of the Original
Plat of Valparaiso, Porter County, Indiana.
Image Source: Google Maps, 2015.

Various accounts of Staves’ public execution indicate that people began entering the small village of Valparaiso early in the morning, traveling by horseback, lumber wagons, and on foot, many bringing picnic lunches as they awaited the event. Staves was escorted through town to the scaffold by Sheriff Merrick, a black-frocked minister, and the Presbyterian Church choir. The minister gave a fiery exhortation regarding the consequences of covetousness just prior to the hanging, after which Staves reportedly confessed to the murder. Then Judge John Herr led the assembly in singing a hymn, followed by a requiem sung by the church choir. The minister shook hands with the condemned man and descended from the scaffold. Judge Herr is quoted as stating that “I was the last man who shook hands with Staves and I gave him a word of encouragement as I stepped off the scaffold.”

Next, Sheriff Merrick properly positioned Staves on the scaffold and released the trap door. The ensuing climax was reported to be “ghastly.” Children screamed, women fainted, and those individuals with “delicate nervous systems were ill for days.” Another writer of the incident writes that “The small boys, who were the object of the preacher’s admonishment were naturally unaffected, but in later years ‘the hanging’ furnished them an unfailing topic for dispute and reminiscence.”

In 1902, The Chesterton Tribune would occasionally publish reminiscences prepared by early Porter County settlers. The May 2 issue of the newspaper contained a historical review written by Perry Blake, a pioneer of Portage Township, who wrote the following concerning Stave's hanging:


Old Mr. Byee or Bailly, of Baillytown, died about the first winter after we settled here. Shortly after, too, occurred the murder of Pelton by Sturns on the Morgan farm. I witnessed the hanging of Sturns, which was in a hollow just south of the city high school, at Valparaiso. 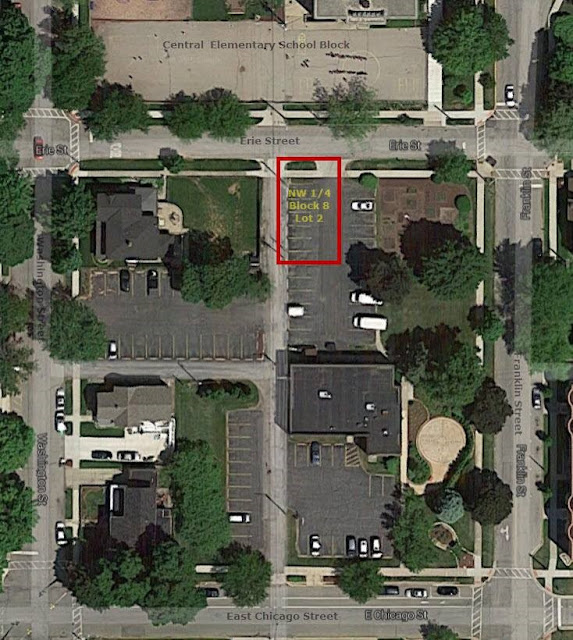 Aerial image of the General location of the public hanging of
Francis Staves for the murder of John Pelton.
Northwest Quarter of Block 8, Lots of Original
Plat of Valparaiso, Porter County, Indiana.
Image Source: Google Maps, 2015.

The Aftermath. The burial sites of John Pelton and Francis Staves are lost to history as no tombstones mark their locations. It is assumed that both men are interred in Porter County. The Porter County Commissioners were left with managing the expenses resulting from the murder. The jailer at LaPorte County, Joseph Seif, was initially allowed by the commissioners $30.63 for maintaining Staves as a prisoner. Seif considered that allowance inadequate, writing to the commissioners as follows:

Sirs: I have just ascertained the amount of my allowance made by you for my services rendered your county in dieting Staves and other contingent expenses for him. In the first place I will say to you that my bill was reasonable; that 50 cents per day is not a fair allowance for dieting a man three times a day.

You must remember that every article of provision was very high and that the 31 cts law was past when all was cheape.

It was cold for him to doo without fire and I was compelled to furnish it.

Additional claims submitted by Jailer Seif included costs associated with the provision of a physician, a minister, and tobacco, with the total claim being $46, approximately one-third greater than the Porter County commissioners had initially allowed. Other claims paid by the commissioners related to Staves’ hanging included: $149.75 to George Cline for guarding Staves and assisting in Staves’ delivery to the LaPorte jail; $103.50 to Joseph Wyatt for guarding Staves; $17.50 to Chenney and Herr for the construction of the scaffold; $12.50 to P. A. Paine for entertaining the guard; $9.20 to Abraham Hall for boarding Staves and his guard; $7.00 to Jacob Axe for constructing the coffin; $5.17 to John W. Wright for procuring trial witnesses; and $4.00 to Jesse Morgan for burial services.

Total costs for the county amounted to $354.62 [approximately $9,310 in 2015 dollars]. As one writer of this incident wrote: “Porter county’s one man show had cost a pretty penny.”

Conclusion. Little is known regarding the genealogy of Francis Staves.

Staves' hanging was not the first legally sanctioned execution to take place in Northwest Indiana. Just fourteen days prior to Stave's execution, on June 15, 1838, David Scott stretched rope at LaPorte.

Joshua H. Coplin, age 19 years, had inherited $600 in gold and silver from his grandfather in Virginia in autumn of 1837. When harvests were completed, Coplin traveled by horseback to Virginia to collect his inheritance. David Scott was an employee on the Coplin farm near Rolling Prairie, and he rode east with Coplin as company, stopping in Ohio to visit his mother. Returning from Virginia, Coplin retrieved Scott in Ohio and together they began riding home to Indiana.

On February 1, 1838, about one mile from the Coplin homestead, Coplin and Scott stopped at a pond to water their horses. While Coplin was breaking ice, Scott shot him in the back of his head with a pistol killing him instantly. Scott would then cut open Coplin's saddle bag and steal the gold and silver. Scott was eventually tracked down; one of the shoes on his horse left a unique imprint in the snow that made tracking easy. Scott would then be incarcerated at LaPorte, convicted of robbery and murder, and sentenced to death.

It has been reported that speculators sold tickets to Scott's execution hoping to profit by offering the best viewing locations. This resulted in the LaPorte County sheriff moving the site of the hanging. Thirty dollars was offered to anyone willing to cut Scott's body from the gallows after the hanging. The offer was not accepted, and the sheriff was resigned to complete the task himself. Similar to Staves in Porter County, Scott was the only legally sanctioned hanging to occur in LaPorte County. Like Staves, Scott's burial location is unknown.